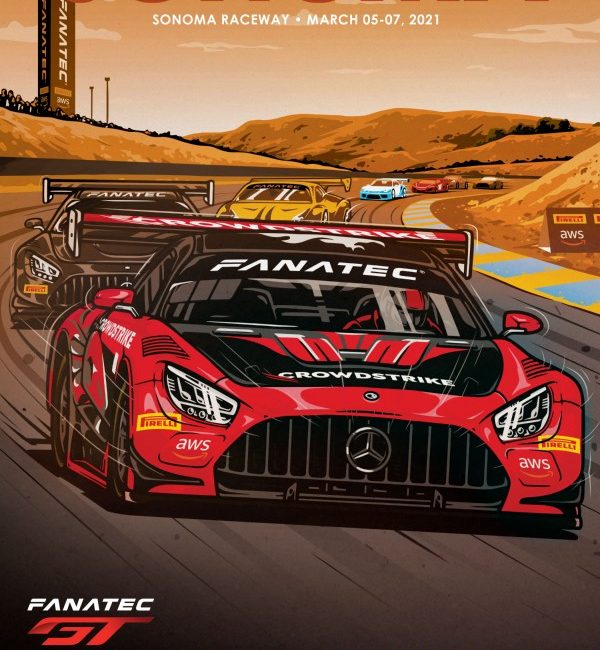 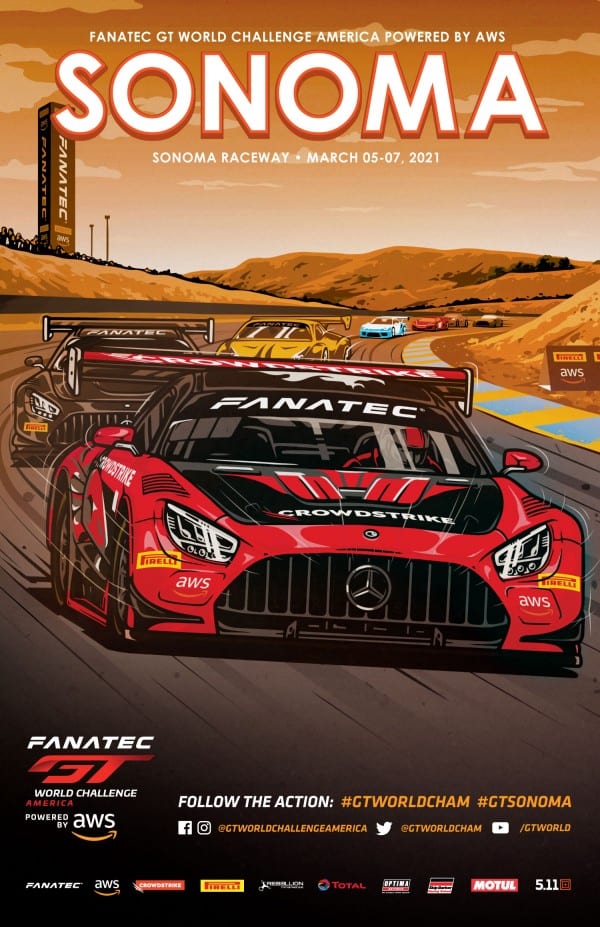 SONOMA, Calif., (February 2, 2021) – The 2021 SRO America season begins this week at Sonoma Raceway with a series of double headers for the GT World Challenge America, GT America, and TC America, and DXDT Racing has a full squad of sports cars ready to hit the ground running. The team’s fleet of five cars will proudly sport the branding of longtime partner CrowdStrike Racing under their new mantra “Win as One.”

The customer racing team’s efforts will be led by the three-car Mercedes AMG GT3 lineup in the Fanatec GT World Challenge America powered by AWS. The race weekend will consist of two double headers, each 90 minutes long. The series format requires two drivers per car to share the driving duties of the race weekend. David Askew and Ryan Dalziel will return to the No. 63 Mercedes, as well as George Kurtz and Colin Braun to the No. 04 Mercedes. Erin Vogel and Michael Cooper are the newest pair to the team, racing the No. 19 Mercedes. All three parings will race in the Pro/Am class, along with the returning Pro/Pro and Am classes.

As previously announced, CJ Moses and the No. 58 Mercedes AMG GT3 will run in the new GT America series, a new opportunity for bronze rated drivers with GT2, GT3, and GT4 machinery. George Kurtz will also take part in the new series this weekend in the No. 04 Mercedes AMG GT3, taking advantage of the additional track time. The pair of forty-minute races only require one driver, with the various of class competitions varied by the type of machinery.

All eyes in TC America will be on Kevin Boehm, the TCA class winner in the 2020 championship standings. He had a highly successful season, securing not only the Drivers championship title, but also Rookie of the Year. Following his strong debut, this weekend he will advance to the TC class in his No. 9 Honda Performance Development Civic Type R. The TC America format will also be comprised of a pair of 40-minute races, with one driver per car.

As a new race season begins for the Fanatec GT World Challenge America powered by AWS, DXDT Racing and Crowdstrike Racing have again partnered with Operation Motorsport, a veteran-led not-for-profit based in based in Brighton, Ontario. Operation Motorsport works with teams across professional auto racing to engage ill and injured service members and veterans affected by military service in an effort to aid in their recovery and rehabilitation.

The program primarily aids veterans unable to get the chance to complete their service, placing them within organizations such as DXDT and Crowdstrike Racing. The supportive team environment creates a community for them to grow and have purpose with application of their skill sets, joining the race programs to assist with paddock operations and standard race weekend preparations. The service members are completely embedded in their assigned team, working the entire race weekends as one of the crew.

For the 2021 race season, Staff Sgt. William Babineau (Ret.) and Staff Sgt. Katrina Williams will work in the GT World Challenge America series on the No. 04 CrowdStrike/AWS/DXDT Racing Mercedes-AMG GT3, as crew on the car driven by George Kurtz and Colin Braun.

CrowdStrike, the Official Internet and Cloud Security provider for GT World Challenge, has helped organize the placement of veterans in its racing programs during the last four years. Operation Motorsport is one of many veteran programs that CrowdStrike supports corporately. It is active in many avenues of placing veterans in employment opportunities with the aim of helping service members integrate into private workplaces. The continued partnership between DXDT Racing, CrowdStrike, and Operation Motorsport will plant the seeds for a better a better future for veterans, long after the 2021 race season.

The customer racing program DXDT Racing has assembled reflects the team’s continued growth after a fruitful 2020 season, followed by the transition to a new 20,000 square-foot race shop in Statesville, North Carolina, and a strengthened partnership with CrowdStrike Racing. Under General Manager Erin Gahagan’s steady leadership, the team has added Gary Penission as the crew chief, and Stephan Pfeiffer as race engineer, and Carlo Vermeulen returns as race engineer. With pre-season testing concluded, each of the team’s entries look to be early championship contenders. All qualifying and race sessions for the season opener at Sonoma Raceway will air live at YouTube.com/GTWorld. For full event information, visit sro-america.com.

David Askew | Fanatec GT World Challenge America powered by AWS
No. 63 CrowdStrike/ DXDT Racing Mercedes-AMG GT3
DXDT just came off a successful test running all five cars at Sonoma last week. We have three really great pro drivers and three strong AMs in the GT World Challenge America series. Everyone brings their “A” game, so we are looking to pick up where we left off last season where we had many podiums, a few wins, and a two-three finish for the championship. On the GT America side we have CJ Moses stepping up from TCR, and George Kurtz racing in the new series as well, and 2020 TCA champion Kevin Boehm stepping up to his next class in TC America. All the drivers have been racing and testing in the off season, and everyone is ready to go.

DXDT Racing continues to make a big investment in SRO as we feel their GT racing series is well suited to our customer racing program. This is our 4th year running the AMG GT3. We have a strong relationship with Mercedes-AMG who are dedicated to their product and continue to help DXDT field fast race cars. Sonoma is a momentum track, well suited to the AMG. We are optimistic for this weekend, as the AMG tends to be a good all-around car and we are in it for the championship. Consistent podium finishes are what we are after; we expect to win races and “be there” when it counts.

Ryan Dalziel | Fanatec GT World Challenge America powered by AWS
No. 63 CrowdStrike/DXDT Racing Mercedes-AMG GT3
We’ve really made some major changes at DXDT Racing during the offseason, mainly relocating the team to North Carolina. But one with that is staying consistent and in fact strengthening is our investment with Mercedes AMG. At the most recent test it was so cool to see five DXDT Racing AMG GT3s running under the tent. I’m proud to have been a small part of building this team and I know we have all the right ingredients to make a run for the championship in all of our entries. Of course I want it to be the 63 that I will once again share with my good friend David Askew. David from middle of 2020 has found overdrive and we come out the gate swinging at Sonoma.

George Kurtz | Fanatec GT World Challenge America powered by AWS
No. 04 CrowdStrike/DXDT Racing Mercedes-AMG GT3
We are ready for this challenge. The CrowdStrike and DXDT teams have made great progress in our offseason testing program. Colin and I were close to an elusive Sonoma victory a year ago. Pursuing a clear victory is something I definitely want to achieve this season, and we’re putting in the work to make it happen.

Colin Braun | Fanatec GT World Challenge America powered by AWS
No. 04 CrowdStrike/DXDT Racing Mercedes-AMG GT3
After we returned to racing after last year’s lockdown, we really found our groove. I feel like Sonoma was a weekend where we showed we were ready to take the next step as championship contenders and put all the pieces together. It’s great to open the season at a track like Sonoma, so hopefully we can start out our year with a home victory for CrowdStrike. Everyone has been putting in a lot of effort in the offseason to make that happen.

Erin Vogel | Fanatec GT World Challenge America powered by AWS
No. 19 CrowdStrike/DXDT Racing Mercedes-AMG GT3
We have great momentum coming into Sonoma. The crew at DXDT has been working incredibly hard to be ready, above and beyond the normal beginning season work. We’ve got a super solid car that we’ve been able to become very familiar with over the last two months. We’re excited to see the competition in this class and get out there, wheel to wheel again.

Michael Cooper |Fanatec GT World Challenge America powered by AWS
No. 19 CrowdStrike/ DXDT Racing Mercedes-AMG GT3
We’ve been testing our No.19 Mercedes to get the chassis dialed in and to familiarize ourselves with the car. That has all gone well but the first race in a new car is always a challenge. Thankfully we have solid teammates and a great group of people overall to help make the effort what it should be. I’m excited to go racing again.

CJ Moses | GT America
No. 58 CrowdStrike/AWS/DXDT Mercedes-AMG GT3
Sonoma last year was one of the highlights of our TCR season. The track is phenomenal, and I can’t imagine how it will be in the Mercedes-AMG GT3. A podium and a good haul of championship points would be a great way to start this exciting new GT America Powered by AWS series.

Kevin Boehm | TC America
No. 9 CrowdStrike/DXDT Honda Performance Development Civic Type R TC
This is where our campaign started to turn for the better last season. Sonoma is a great challenge for both driver and car. It takes a finely-tuned racecar to be successful there so I will have to learn the new car quickly. I’m confident the CrowdStrike/AWS/DXDT HPD Civic Type R TC will be up to the task, but we’ll have to wait until we’re in California to see its full potential.