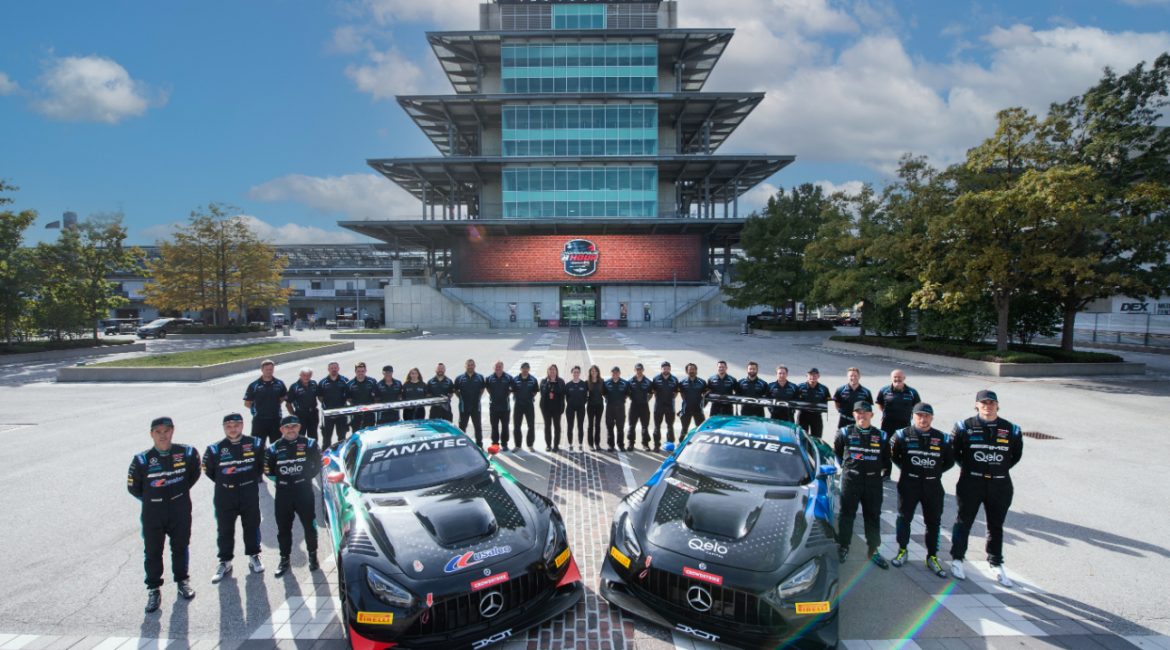 INDIANAPOLIS, Ind., (October 11, 2022) – Professional sports car racing team DXDT wrapped up the 2022 race season this weekend at Indianapolis Motor Speedway at the Indianapolis 8 Hour Presented by AWS, the only endurance race in the 13-round championship. The team’s Am entry earned a second-place finish for David Askew, Scott Smithson, and Valentin Pierburg in the No. 08 Qelo Mercedes AMG GT3.

The team’s Fanatec GT World Challenge powered by AWS season came to a close at the endurance event, where the team shifted their two Pro/Am lineups to instead race one all-pro and one all-am ranked cars. The team suffered various hardships across the eight-hour endurance event, persisting through a series of setbacks to conclude the season giving it their all.

The team earned 11 top-five finishes and three podium finishes in the 2022 season, a year that the team considered a season of growing with new lineups in its pair of Mercedes AMG race cars. Am-driver Scott Smithson stepped up to the GT World Challenge series, the top tier in the various SRO America championships after a season with DXDT in TC America. Joined by DXDT newcomer Bryan Sellers, the pair found a progressive flow and improvement in results in the Pro/Am class with every race weekend. A highlight of the season for the paring was the second-place finish earned at Road America in Elkhart Lake Wisconsin, with the DXDT Racing-prepared Mercedes. Dirk Muller also joined the team in 2022 to race alongside team owner and driver David Askew, and the new pair earned a pair of podiums at VIRginia International Raceway’s doubleheader.

Comprised of 13 races spread across four events, the 2022 season took competitors all over North America, requiring teams to work and compete in the 100-degree heat of Sebring, Florida to the 40-degree Indianapolis Motor Speedway. The DXDT Racing crew persevered and excelled through it all, testing and racing throughout the whole season, improving on and off track together.

This year’s off-season leading into the 2023 championship will be shorter than in previous years, with the start of the season beginning two months earlier in February. DXDT Racing will make an announcement regarding future racing plans at a later date.

David Askew | No. 08 Qelo Mercedes AMG GT3
Hey, we finished another Indianapolis 8 Hour! This is the third or fourth one that we’ve done, and it was a great experience. Everybody had a really good time. The crew did a fantastic job. They’ve been working hard all season and it seems like the season was over almost before it began. Another year is gone, we’re going to be working hard in the offseason doing some testing, getting cars put back in shape. And get ready to go to New Orleans in February!

Scott Smithson | No. 08 Qelo Mercedes AMG GT3
It was a good finish to the season and we learned a lot. We grew a lot as a team and it’s always awesome to race at Indianapolis Motor Speedway. It feels good to even finish the eight hour and it was an enjoyable experience. It was great running with Valentin joining our effort as well as well. DXDT Racing is such a wonderful group to be around and a ton of fun.

Dirk Muller | No. 63 USALCO Mercedes AMG GT3
I’m super happy for David, Scott, and Valentin. They had a great race going fighting for first, but the end they came in second. It’s always nice to have a trophy in hand at the end of the race. For the 63 car, I’m very bummed and honestly, disappointed. That is definitely not the way we wanted to finish the season. Our hopes were high. We were third, and half a tenth off of first place. We started the first practice on a very high note and were quite optimistic. From that moment on, it just went south. We had to fight with a little issue in some practice and we never really recovered from that one. It’s a bummer the boys worked so hard. They had to get the spare car ready after we lost so much practice time. They did everything they could, but it’s just one of those things. We had an issue with the ABS and had to stop for repairs, and after that, the goal was to finish the race in honor of everyone’s hard work. I’m proud of what we achieved this season. We were getting stronger with each outing, each race, each weekend. I’m really happy and proud for the team.

Bryan Sellers | No. 63 USALCO Mercedes AMG GT3
It’s a very difficult race for us. Unfortunately, we had to retire early. The difficult thing is it’s not a representation how strong we were and where we should have been. The guys were exceptional this weekend. They had a couple of late nights fixing things, and they were able to take our race car, turn it over into our spare car and get it ready for today. The biggest disappointment was that we just couldn’t end up finishing for them. The good thing is, is we were able to learn a lot and we’re able to look and see where we’re at, where we need to improve, and that gives us a good judge for next season. I’m really proud of the guys and their ability to never give up and never quit. I’m looking forward to getting going again.

Patrick Assenheimer | No. 63 USALCO Mercedes AMG GT3
This weekend had a lot of ups and downs. It should not have been this weekend for us. It was a pleasure to drive for this team and I hope to see them next year again.