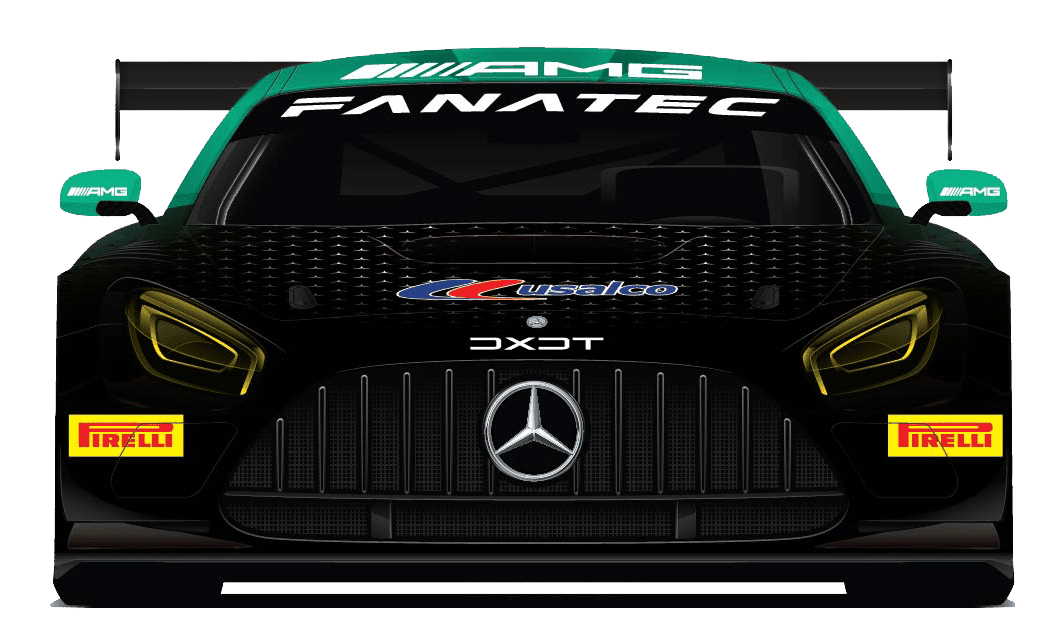 STATESVILLE, N.C., (February 15, 2022) – In preparation for the 2022 Fanatec GT World Challenge America powered by AWS season, DXDT Racing has confirmed its lineups in the Pro/Am class, entering two Mercedes AMG GT3 cars in the upcoming championship. David Askew and Dirk Müller will race in the No. 63 USALCO Mercedes AMG GT3, joined by Scott Smithson and Bryan Sellers in the No. 08 Qelo Capital Mercedes AMG GT3.

One of the premier places in North America for professional and amateur GT3 drivers to compete together, Fanatec GT World Challenge America powered by AWS will return with its familiar format: 13 races spread over seven race weekends where two race car drivers will split the driving duties of each 90-minute race. The GT World Challenge America series will have three different classes based on driver skill rating: Pro/Pro, Pro/Am, and Am. Both DXDT entries will again compete in the Pro/Am class, comprised of one professional and one amateur driver. The team has competed in this class from its early days in the series, making great success as one of the top entries in an always competitive field.

In 2021, the team had a strong season with its three-car lineup in the headlining series, earning 18 top-five finishes, nine podiums, and three wins. For team owner and driver, David Askew, the 2022 season will mark his sixth consecutive year competing in the SRO America-sanctioned series after starting his racing career in 2015 club racing with NASA at Utah Motorsport Campus. From there, he joined the Lamborghini Blancpain Super Trofeo series, where DXDT fielded several entries over a two-year tenure.

Team owner David Askew will be joined this year by contracted Multimatic driver Dirk Müller. The former Ford factory driver holds a coveted win at the iconic 24 Hours of Le Mans, winning in 2016 on the 50th anniversary of Ford’s first overall win. Müller is also known to many North American fans for his involvement in the Rahal Letterman Racing GTLM team in the American Le Mans Series as a factory driver in the 2000s. Most recently, he raced the WeatherTech Racing Mercedes AMG GT3 at the Rolex 24 At Daytona in January and finished fifth.

After a year hiatus from SRO America to compete in the IMSA Michelin Pilot Challenge, Scott Smithson will return to DXDT Racing. He last raced with the team in 2020, competing in TC America’s TCR class. He had a successful season, earning six podiums and three wins. He finished third in what was a highly competitive season, showing the strength of his skill on track. His return to the team will see him move up full time to the GT3 category, racing alongside young sports car racing veteran Bryan Sellers. The 2018 IMSA WeatherTech SportsCar Championship GTD class champion and 2020 Rolex 24 Hours of Daytona race winner has been working with Smithson over recent seasons, lending his racecraft expertise. Sellers will join Smithson behind the wheel of the No. 08 Qelo Capital Mercedes AMG GT3.

The 2022 race season will see the series return to the usual fan-favorite road courses, with the addition of the brand-new Ozarks International Raceway in Gravois Mills, Missouri. The new circuit finished construction in the late summer of 2021 and features 3.87 miles of flowing turns and varying elevation changes, on its 650-acre plot in the Lake of the Ozarks. The SRO-America weekend will be the first professional racing event for the new circuit, no doubt offering an exciting and action-packed weekend. The 2022 season will officially kick off on Easter weekend, April 15-17 at Sonoma Raceway, and Sonoma, California.

In preparation for the approaching GT World Challenge America season kick-off, the team has already completed rounds of off-season testing, getting driver and crew up to speed to contend for another championship. Askew and Smithson will also take advantage of extra track time at the end of the month, joining SRO’s GT America series start at the Grand Prix of St. Petersburg, February 24-26. Created solely for amateur drivers, the GT America series allows competitors to race GT3, GT3, and GT4 machinery in a pair of 40-minute races. Askew and Smithson will use the weekend to race their 2022 cars in a competitive environment, continuing to acclimate before their GT World Challenge America season begins in April. For all series information, visit www.sro-america.com.

David Askew
I’m really looking forward to this season. It seems a long time since we last raced at the Indy 8 Hour, but we’ve been busy ever since. DXDT continues to grow and evolve, and I spend more and more of my time working on the team. People are any team’s greatest asset, and I really enjoy the team-building part. It’s been extremely challenging for me being new and coming into the sport without a big rolodex, but I keep chipping away at it. Slowly but surely, we are building a great team! This year we will focus on two Pro/Am cars in SRO GT World Challenge America. We have a lot of new faces. Simon Morley is our new Operations Manager with overall responsibility for the shop, race cars, and equipment. He has a lifelong wealth of experience with race teams and race cars, everything from GT, to prototypes, to F1! We are deepening our relationship with AMG-Mercedes with the addition of my co-driver Dirk Muller. Bryan Sellers will co-drive with Scott Smithson who was one of our TCR drivers in ’20. We’ve already had two tests at Sebring, and Scott and I will both run in the GT America race at St Pete as a kickoff before we start the season at Sonoma in April. It’s looking like an incredibly competitive field this year, and clearly SRO is doing the right things to create the best GT racing in North America. I can’t wait to get started!

Dirk Müller
I’ve had a really warm welcome to DXDT Racing, and this is a great start to 2022. It’s good guys, a good team, and I feel happy to support them. I can’t wait to get the season going. Unfortunately, the season starts in April, so we have to be patient. We’ve been able to test and get ready in the meantime. With Dave, Scott, Bryan, and myself, we’re going to have a good season.

Scott Smithson
Looking ahead to the 2022 race season, I’m excited to get back with DXDT Racing after running with the team in 2020 in a TCR car. Last year, I ran a TCR car again in IMSA and I’m looking forward to moving into GT3 racing now. I’m really excited to be back with the team. The way they operate is like a family, which is a lot more enjoyable for me. I’m looking forward to hopefully going for a championship.

Bryan Sellers
I’m very excited to be joining DXDT Racing for the 2022 season. I think David Askew has put a bunch of really great people into place and is trying to build something that’s incredibly special with this program. It’ll be great to return to SRO. It’ll be my first time back since 2017 and it’s quite a bit different than it was then, so I’m looking forward to learning the rules and seeing the progression of the series. I’m looking forward to being back with Scott as my co-driver. I’ve been able to work with him for a couple of years, watching him progress through the TCR ranks. I can’t wait to see what’s capable of in a GT3 car. He’s been incredibly quick, and it seems like he’s very good student of the sport. I’m excited for all the pieces to come into place and see what the season holds.

About DXDT
DXDT Racing is a high-performance sports car racing team founded by David Askew in 2014. Located in Statesville, North Carolina, the team’s focus is GT3 racing in SRO’s North American racing series. Over the past few years, DXDT has been building its reputation as a race and championship-winning team. DXDT is comprised of a group of highly experienced professionals with championship-winning backgrounds. www.DXDTRacing.com

About USALCO
USALCO is the premier manufacturer of Aluminum based chemicals for industrial and municipal markets. USALCO® is the leader in potable as well as industrial water and wastewater treatment chemistry. We are well-known for high quality and low cost alumina chemical applications, such as products for the manufacture of catalysts, titanium dioxide and molecular sieves. With over 60 years of experience in manufacturing coagulants, USALCO’s extensive product line includes our industry leading brands DelPAC®, AlcoPAC®, and Delta-Floc®. USALCO has 27 manufacturing locations, as well as its own dedicated fleet of trucks, ready to service needs anywhere in North America.

About Qelo
Qelo is a seasoned land development firm, founded and managed by experienced partners who hold over 50 years combined experience in real estate investment and capital management. The firm’s varied projects range from land development, vertical construction, and land banking. Qelo focuses on a portfolio of diversified projects throughout the ever-expanding Utah market and across the Intermountain West – this focus allows the firm to strategically select high-quality short-term and long-term projects to take advantage of a rapidly expanding economy within the region.