STATESVILLE, N.C. (September 14, 2021) — Only a handful of races remain in the 2021 season, and DXDT Racing is equipped and ready for the final push in their respective championships in SRO America. This weekend, the Mercedes AMG customer racing team will field two entries in the GT World Challenge America and one in the TC America series at Watkins Glen International. This event marks the first time SRO America has competed at the event since the COVID-19 pandemic began, having last raced at the circuit in 2019.

Located in the Finger Lake region of upstate New York, Watkins Glen International offers 3.40 miles of sweeping turns and a long back straight, producing plenty of areas for tight battles amongst the sports car racing competitors.

Load-in for the transporters will begin Thursday morning, followed by two practice sessions for each series on Friday before back-to-back race days.

Fanatec GT World Challenge America Powered by aws
Following a podium finish for David Askew and Ryan Dalziel in the No. 63 Mercedes AMG GT3 at Road America, the team conducted a private test at Watkins Glen International in preparation for this weekend’s doubleheader. With one win under their belt this season, the pairing of Erin Vogel and Michael Cooper have hit their stride this season in the No. 19 Mercedes AMG GT3, putting forth their strongest qualifying performance to date at Road America. Watkins Glen is a home track for Cooper, who first raced at the circuit in 2018. With three wins, six podiums, and 12 top-fives, DXDT Racing has proven to be a strong contender as the series enters the final rounds of the season. 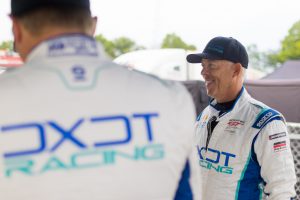 David Askew | Fanatec GT World Challenge America powered by AWS
No. 63 CrowdStrike/ DXDT Racing Mercedes-AMG GT3
I really look forward to Watkins Glen. It feels like we haven’t been there forever. We just came off a good test there a little over a week ago and I had forgotten how fast the place is. The grip is still outrageous. I’m a huge fan of the run out of turn one, flat up the esses, no lift, and then not braking until the bus stop! Ryan and I had a decent weekend last round at Road America and we are excited to pick up where we left off. This is the time of year when it seems like every other week we are testing or racing. We’re not in the hunt for a season result so we are trying a few different things and focusing on getting the most out of the bronze driver.

Ryan Dalziel | Fanatec GT World Challenge America powered by AWS
No. 63 CrowdStrike/DXDT Racing Mercedes-AMG GT3
Watkins Glen is always a special racetrack to visit and we had a really good test there recently where we found some problems under the skin of the car that explained our lack of pace at Road America. Once we dialed those issues out, we really made gains with the car and David got down to some really good times. Going into the second half of the season I feel really good about the 63 car being a consistent podium contender. 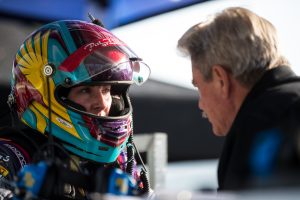 Erin Vogel | Fanatec GT World Challenge America powered by AWS
No. 19 CrowdStrike/DXDT Racing Mercedes-AMG GT3
I’m looking forward to racing at a new track. We had the opportunity to test at Watkins Glen recently, and it’s a fabulous track. It’s high speed with tons of elevation change, and lots of large-radius, sweeping turns. It’s very much my style of track, and I hope that we’ll have another opportunity to show our pace as we did at VIRginia International Raceway. I’m also looking forward to escaping our 95-degree fall weather here in SoCal for a little taste of New England autumn weather.

Michael Cooper | Fanatec GT World Challenge America powered by AWS
No. 19 CrowdStrike/ DXDT Racing Mercedes-AMG GT3
I’m excited to be entering home race week here at Watkins Glen International. While this GT World Challenge America season has had its highs and lows, I’m really proud of the strides my co-driver, Erin Vogel and I have made with the support of everyone at DXDT Racing. Our tenacity and hard work paid off earlier this year with a record-making victory at VIRginia International Raceway, and now we’re ready to give it another go this weekend.

TC America Powered by Skip Barber Racing School
With six top-five finishes in eight races, 2020 TCA champion Kevin Boehm has hit his stride this season as he has advanced to the TC class in TC America. The driver, who also engineers his own car, has celebrated two victories this season, earning an additional podium. His strong performance this weekend puts him second in the TC America championship standings.

Race one will air live on Saturday, September 18 at 4:45 pm Eastern on Youtube.com/GTWorld, followed by race two on Sunday, September 19 at 9:00 am Eastern. 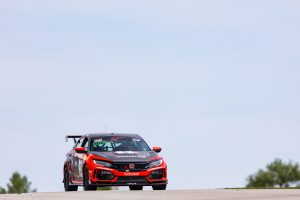 Kevin Boehm | TC America
No. 9 CrowdStrike/DXDT Honda Performance Development Civic Type R TC
Watkins Glen is where my dream to race in TC America started to take shape in 2019 so it’s going to be a special event for me. I’ve had a lot of success here in SCCA competition in the past, so I have high hopes for the weekend. I’m long overdue for a visit to the podium.