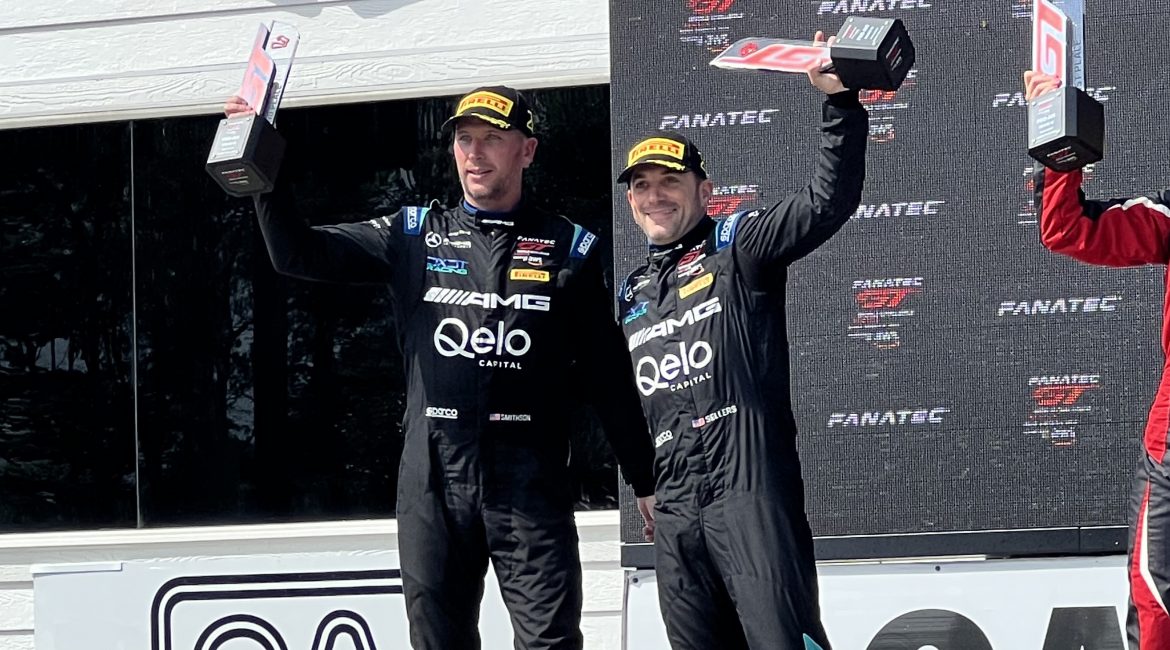 ELKHART LAKE, Wis., (August 21, 2022) – DXDT Racing is enjoying a sweet celebration this weekend after a job well done at Road America for Rounds 9 and 10 of the Fanatec GT World Challenge America. Not only did the team earn three top-five finishes with their pair of Mercedes AMG GT3 cars, but the No. 08 Qelo Mercedes pairing of Scott Smithson and Bryan Sellers achieved a long-awaited first podium of the season in Sunday’s headlining race.

The pair’s strength shone early at Road America, when Smithson and Sellers set the fastest lap time in the final practice, setting the pace for Saturday’s qualifying sessions. Smithson produced a best-lap time to set the No. 08 up to start from fourth place that afternoon, proud to lead the team charge. David Askew started the race from seventh in the No. 63 Mercedes AMG GT3, and both cars were perfectly positioned to avoid a lap-one crash involving multiple cars. The race immediately switched to full course caution and the team used the time to check with the drivers to make certain that the pair of blue and green Mercedes AMG GT3 cars had escaped without any problems. While Smithson held his fourth place starting position, Askew gained two spots to restart fifth behind his teammate. The pair raced nose to tail as they took the green flag, working together to put pressure on the No. 45 Porsche of Charlie Luck. They pitted at the same time during the mandatory window, and professional drivers Bryan Sellers and Dirk Muller took over to complete the race. In the No. 08, Sellers immediately put heavy pressure on Michael Cooper in the No. 43 Acura and made quick work to make the pass on the inside of turn three. As he set his sights on Jan Heylen in the No. 45 Porsche, Muller followed suit, passing the Acura, bringing the pair to fourth and fifth. With 32 minutes remaining, the duo was unfortunately held up by a slower car, losing valuable time to contend for a podium against the Porsche. In the end, the limited amount of time failed to allow for the pair to make the pass and close the gap, but all was well with the strong results. Smithson and Sellers tied with their best finish of fourth place, and the pairing of Askew and Muller earned a fourth fifth-place finish of the year.

On Sunday afternoon, the No. 08 of Bryan Sellers ahead led the team charge on the start, beginning the race from third place with Dirk Muller and the No. 63 right behind in fifth. The field took the green flag and the lead pack raced tightly into turn one, allowing Sellers to apply heavy pressure to Jan Heylen in the No. 45 Porsche 911 GT3 R. As Sellers fought for position, Bill Auberlen and the No. 94 BMW slid between the two DXDT Racing machines, and Muller stayed on his rear to fight for fourth place. The opening stint for the pro-ranked drivers remained fairly uneventful, and the pairing pitted during the mandatory 10-minute window at the halfway point to allow for their co-drivers to complete the weekend. While Sellers and Smithson had a smooth pit stop, the No. 63 of Muller and Askew had trouble getting the right rear tire off, costing the team valuable time. Undeterred, Askew rejoined, putting in strong and consistent laps near the rear of the field, ready to still produce a strong performance.

Meanwhile, near the front of the field, Smithson reeled Charlie Luck’s No. 45 Porsche, staying fast and close, looking to make the perfect move. The Mercedes had the speed and Smithson bided his time, setting up the perfect pass on the backstretch of the four-mile course. With ten minutes to go, Smithson made the pass and sailed to the second-place finish, celebrating his first podium of the season with Sellers. The strong weekend moves the pair up to eighth in the Pro/Am championship point standings, right behind Askew and Muller in seventh.

Just three races remain in the 2022 championship: Rounds 11 and 12 at Sebring International Raceway September 11-12, and Round 13, the Indianapolis 8 Hour October 7-9. Following the team’s continued progress with every race event, the DXDT Racing Mercedes AMG GT3 cars will be sure to grace the podium again.

David Askew
Sunday was a great race for the team and a great result for the guys with the No. 08 getting a second-place finish. No. 63’s day was not so good, with a little issue in the pit. We gave it our best shot. I’m really happy for Scott Smithson for his first time on the podium this year. He’s come a long way. He only started racing a few years ago and he’s already almost winning races in the GT World Challenge Pro/Am class. He’s only got one more spot to go to get to first, so we’ll be looking for that next.

Dirk Muller
What an end for the weekend. I’m super happy for the No. 08 to finally be on the podium. They worked so hard over the year and we on our side had crossed that one off already. We definitely had the chance to have both cars on the podium, but unfortunately, we had an issue at the pitstop. The right rear tire wouldn’t get off so we lost the chance right there. Otherwise, it was a flawless weekend. The cars were really good, really strong, and we will take that momentum for the next round in Sebring.

Scott Smithson
It was way too long coming for this podium. It’s been such a frustrating season for me. We’ve always had pace. Something would happen, whether it was bad luck or mistakes. Road America was good to me in TCR a couple of years ago as a turning point, and hopefully this will be too. I’m so grateful for the DXDT crew that has been there and been so positive. It’s been frustrating for everyone. They’ve pulled late-night fixes. The team is awesome, as well as Bryan. This was a great day.

Bryan Sellers
I’m super excited. It’s really great for the guys to get rewarded for all their hard work. Big hats off to Scott today. We gave him a car that was in a position to finish third and he one-upped it and finished second. He did a great job keeping the pressure on Charlie and taking his opportunity when it came. That’s the potential that we’ve seen in him from the very beginning and more than anything, super happy that he could deliver what he knew he was capable of and bring it home for the guys in second.